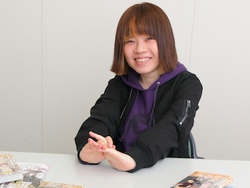 Ōima was born on March 15, 1989 in Ōgaki, Japan as third daughter of a sign language interpreter mother and has an older sister and an older brother. Due to her mother's work as a sign language interpreter, Ōima was inspired to write the d to write the A Silent Voice manga series where she got help from her mother and her sister working on the series.[1] [2]

Her first manga was Mardock Scramble which was an adaptation of the same-named novel written by Tow Ubukata and was released in 2009.[3] She was even responsible for an illustration of the ending sequence of the ninth episode of Attack on Titan. [4] Yoshitoki Ōima worked alongside other manga artists on a collaboration manga called Ore no 100-wame!!. In 2016 Yoshitoki Ōima released her third full manga series under the moniker To Your Eternity.

Retrieved from "https://fumetsunoanatae.fandom.com/wiki/Yoshitoki_Ooima?oldid=3156"
Community content is available under CC-BY-SA unless otherwise noted.