The first volume of To Your Eternity features The Nameless Boy and Joaan on the cover. On the back of this volume is a silhouette of March holding a fruit.

A lonely boy wandering the Arctic regions of North America meets a wolf, and the two become fast friends, depending on each other to survive the harsh environment. But the boy has a history, and the wolf is more than meets the eye as well … 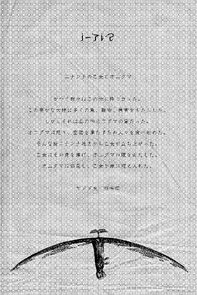 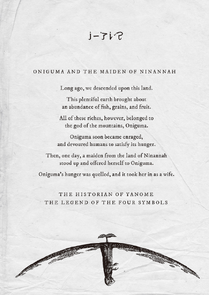 Long ago, we descended upon this land.
This plentiful earth brought about an abundance of fish, grains, and fruit.
All of these riches, however, belonged to the god of the mountains, Oniguma.
Oniguma soon became enraged and devoured humans to satisfy its hunger.
Then, one day, a maiden from the land of Ninannah stood upon and offered herself to Oniguma.
Oniguma's hunger was quelled and it took her in as a wife.

THE HISTORIAN OF YANOME
THE LEGEND OF THE FOUR SYMBOLS

Community content is available under CC-BY-SA unless otherwise noted.
Advertisement