Gugu (グーグー) is a young boy from Taknaha who works at Beer Gramps' shop.

Gugu has blond hair and light blue eyes. He used to wear a light brown chameleon mask outlined with a red and black stripe, but has since switched to a more elaborate chameleon design when he gets older. He also wears tan-colored shorts with a red and white pattern on the left leg and a white and blue stripe at the bottom.

Despite being so young, Gugu has a somewhat jaded and pessimistic view on life, which is likely due to his poor upbringing and his older brother using up all the money they were trying to save. Yet, when Rynn gives him her ring that he could have spent on himself when he finds his brother beaten up and withered in an alleyway, he decides to give him the ring instead; showing that he has a caring side under his supposedly bitter exterior.

If his mask is brought up, Gugu gets very defensive and scared of people trying to see his face, believing his accident to have scarred him so much that people run away when they see his face. Given that people have called him a monster without his mask, he 's not wrong to keep his face hidden. He also falls into a spiral of despair when Beer Gramps uses him to distill alcohol and hates feeling like a tool and a monster.

He gets shy and nervous around Rynn, who he has a crush on, which leads to his adoptive family, wondering why he just tells her he likes her and that he was the one who saved her life not too long ago.

When Gugu reaches his teenage years, he's become more mature and wise. He also loses all negative feelings towards his mask, saying that he likes his look despite being annoyed by people trying to take a picture of him and his mask after his revival in the new era.

From a young age, Gugu and his brother, Shin, have been working as servants for various families. Because he was so young, Gugu mistook one employer as his family and was confused when they moved away but didn't bring Shin and him along.

A few years later, Shin and Gugu promised each other to work hard and earn money to build a big house.

He ponders his identity, wondering why he is who he is and why he wasn't born into a rich family. His older brother Shin says that he often thinks about that as well, but reminds Gugu of their promise to work hard, earn money, and build a big house in which they'll live. The next day, Gugu eagerly goes to work selling materials and other items in the marketplace. There, he often sees a wealthy girl walking past his stand. Afterward, he'll return home, and the process will repeat.

One day, while at work, Gugu wonders where the girl lives and what her name is. She comes up to him and asks if he sells any seeds, to which he quickly replies no. When he returns home, he sees Shin with a group of men and discovers that some money is missing from the box. Gugu asks Shin if his friends saw the box, but he tells Gugu not to doubt his friends. Shin then says that if some money was stolen, they can just work harder to earn it back. Gugu decides to hide the box up in the tree instead of in their tent and eat dinner when he sees a dog.

The next day, he sees the same dog at the market and eventually finds out that the dog belongs to the wealthy girl who is looking for her dog Myrr. She rewards Gugu with a ring and says that if he sells it, he'll never have to sell vegetables again. Gugu returns home to tell his brother the good news, but finds all the money is gone and a note left by Shin. Gugu mindlessly continues to work, until one day, he notices a cart with logs and thinks about how easily he would die if that cart crashed. One of the logs falls off and almost crushes him, but it misses and the cart driver goes to get help to move the log. The log starts rolling down the hill just as Gugu notices a girl at the bottom. He runs to rescue her and, although he can save her, his head ends up being crushed by the log. Gugu, along with Fushi's friends, has been following Fushi throughout all the events of its life as a spirit. He was later seen walking alongside with Fushi by Bonchien due to his psychic abilities.

After winning the war against the knockers in Renryl, Gugu and Cam become Fushi's "grave keepers", meaning that they take care of the building in which Fushi is sitting and expanding his roots to destroy all remaining knockers. He spends the rest of his days helping Cam and his friends and eventually dies after being heavily wounded in a battle with the Anti-Fushi faction. Since he is already doomed, he takes his own life by means of a euthanasia drug, just like March.

After the "time skip" into the new era, Gugu is revived and finds himself in a field. He gets up and soon finds a house that looks just like the Beer Gramps' tower. A boy that looks very similar to Shin and is carrying a box with bottles inside is passing by outside the building. The boy notices Gugu, they make eye contact and Gugu approaches him.

In chapter 121, Gugu is transported to (former) Renryl by the Tastypeach Foundation and reunites with Fushi and the others. They now all live together in Kazumitsu Aoki's house.

Gugu initially doesn't see the immortal as anything more than an annoying kid in the shape of a human, and is jealous of Fushi when Rynn shows an attraction to Fushi over him. But after some time when Fushi proves that he does care for Gugu he starts seeing him as his "monster brother". He even fights alongside Fushi against the knockers with the two making a wonderful team. However, when he dies protecting Rynn, Fushi is clearly heartbroken at the loss of his adoptive brother and even goes as far as to use Gugu's form to lie to Rynn.

When Gugu first met Rynn, it was by returning her lost dog which she repaid him by giving him her family ring so he could spend it for himself. Later, he saves her from a pile of logs that end up crushing his head, and giving Rynn her small scar. After being patched up by Beer Gramps, he still retinas his crush on Rynn when she comes to the shop and gets extremely bitter and jealous when she shows more romantic attraction towards Fushi than him. He and Rynn tend to fight a lot, but the two do start to grow a budding romance, with Rynn not knowing that it was Gugu who saved her from those falling logs.

After the two become teens, Rynn invites him and Fushi to her birthday party, where her parents are trying to arrange a marriage for her. Gugu tries to put his feelings aside, knowing that Rynn had to marry nobility since she was a noble and just wishes for her to be happy. But when her house begins to fall apart after a knocker attack, Gugu uses his body as a shield to protect her from the rubble, and Rynn opens his mask and kisses him before his death.

Beer Gramps is the one who found Gugu, saved him, and gave him his mask as well as the gut in his belly that helps distill his alcohol. He sees Gugu as his own grandson.

Shin and Gugu used to be very close as brothers, but one day, Shin betrayed Gugu by taking all their savings and leaving Gugu to fend for himself. The two meet again in an alleyway when Shin is thrown out of a door and lays on the ground, seemingly unconscious. Gugu gives him Rynn's ring to help him live a better life, but he did not forgive him (Shin asks if he's Gugu, to which he responds, "I don't have a brother"). Four years later, Shin comes to Beer Gramp's shop to meet Gugu again. Shin clearly has trouble keeping the conversation going while Gugu keeps silent. Finally, he cries out, "What the hell are you here for?! Did you come here just for me to tell you how worthless you are?!". Shin tries to apologize, but Gugu keeps going, saying that the Shin who betrayed him was "the real you". Shin tries to show that he has changed by showing Gugu Rynn's ring, saying that "yeah, that's right, but you still extended a helping hand to the likes of me". Gugu takes the ring and throws it into the grass to which Shin jumps forward to catch it. Despite Gugu's obvious disgust towards his brother, Shin insists that he will always be there and invites him to live life as a family again. Gugu, on the other hand, doesn't want his brother to take away any more of his "precious treasures", the people around him.

Gugu has become very strong after years of training.

Gugu has excellent cooking skills and is responsible for cooking meals for everyone. When he leaves, Beer Gramps and Pyoran greatly miss his food.

With the help of his modified mask and by using the alcohol in his stomach, Gugu can breathe fire. When he shuts the lid of his mask, the pressure created sets fire to gunpowder balls concentrated at the nose. 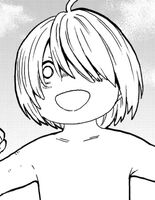 Gugu before his injury

Gugu after the 4-year time skip

Gugu and Rynn on the cover of volume 4 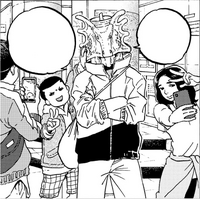 Gugu at Renryl airport
Retrieved from "https://fumetsunoanatae.fandom.com/wiki/Gugu?oldid=6146"
Community content is available under CC-BY-SA unless otherwise noted.